“Music for Land and Water was produced in 1983 following completion of my work on the Imposed Order and The Neo-Realist (at Risk) albums. Acting as a sort of proto- lower case construct, Music for Land and Water was composed for an ensemble of four closed-loop tape players — each player running a different duration loop — as part of a month-long gallery installation. Instrumentation was limited to a Moog and a Sequential Circuits synthesizer and a Hohner Pianet. Processing was simple: a Lexicon delay line, some spring reverbs and basic tape manipulation. Pitch and time compatible phrases and fragments were duped against a uniform click track, edited, isolated and mixed down to the four monaural closed tape loops. It was later “performed” in a presentation including works by Marc Barreca and Steve Fisk in Seattle’s Seward Park open-air amphitheater.

During the Seward Park event — the cover art is derived from a topographic map of the area — the breezes contributed occasional pitch bend, tremolo and vibrato as open-loops made their way from one reel-to-reel deck to another. The setting itself proved ideal in supporting what was then described as “vertical music” — allowing listeners to freely enter and exit the work as they moved from amphitheater to the shoreline to points approaching silence out along the heavily wooded trails. The versions reproduced here are derived from the studio captures of the closed-loop cartridges as used for the original installation. Unlike earlier CD or cassette versions of MFLAW, these tracks have been edited to conform with the time constraints of vinyl.”
– K. Leimer, July 2018

The cover is made of high quality organic recycled paper, printed by silkscreen.
The artwork is a remake of the original one. It represents an abstract topographical map of Seward Park bay in Washington Lake, Seattle, where the music was recorded.
With the record, you will find an insert with the full artist description of his work. 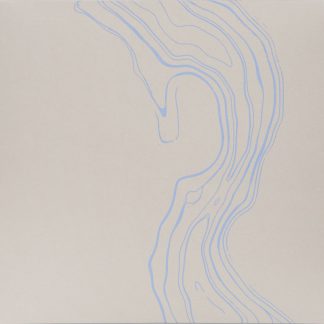