“In 1983, with 27 years of age, already working intensely and carrying my instruments on the road of music in various directions and already fully contaminated by dreams of music and the magic of recording, which started with my beloved and memorable Group Acaru in 1980 in the live album recorded in Tokyo and the album Aqualouco recorded in São Paulo in 1981, at the dawn of independent production in Brazil.

With the dispersion of Group Acaru, it was inevitable for me to go solo, not very common for a percussion player at that time.

Looking at my instruments I realized that most were made of Metal or Wood and the junction of these two words in Portuguese “Metalmadeira” generated a third word “Alma” which means soul, and expresses intensely where my artistic and musical expression was coming from, and it was outside academia.

“Metalmadeira”, now a 35-year-old son, keeps giving me joy and feeding mysoul!
At the São Paulo Art Biennial in 1984, I gave a copy of this album to the English musician and producer Brian Eno who was doing a seminar on minimalist music.
In 2016 DJ and producer John Gomez in a CharityBazaar in Lodon found that copy which I had autographed.
Three songs were included in the compilation. “Outro Tempo”(AnotherTime), released on vinyl in Europe brought memore joy and guided me here for a special opportunity to work on new versions of two songs from that album, Madeira I and Madeira II, with the participation of two legendary Brazilian artists no longer among us, singer-songwriter Belchior and the virtuoso bassist Nico Asumpção, featuring the keyboard players Paulo Calasans and João Cleber Frutuozo, and the elegance of the musician and mixing engineer Emil Shayeb, a gift to us offered by “Les Giants” that once again believe in the magic of the Metal and Wood.
Thank you all!”

The outer cover is made of high quality recycled paper, printed by silkscreen.
The inner cover artwork is the orginal from 1983 made by Elifas Andreato, representing a metal nail in a piece of wood releasing blood, because the union of the poroguese words Metal and Madeira (metal and wood) create the word Alma (soul). The artwork will be adjusted for 2 colors silkscreen print.
With the record, you will find an insert with the full artist description of his work and all the artists involved. 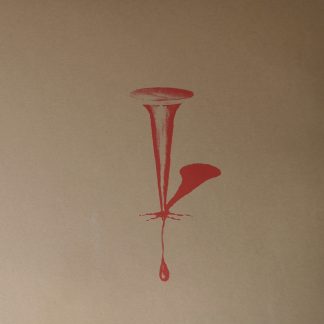